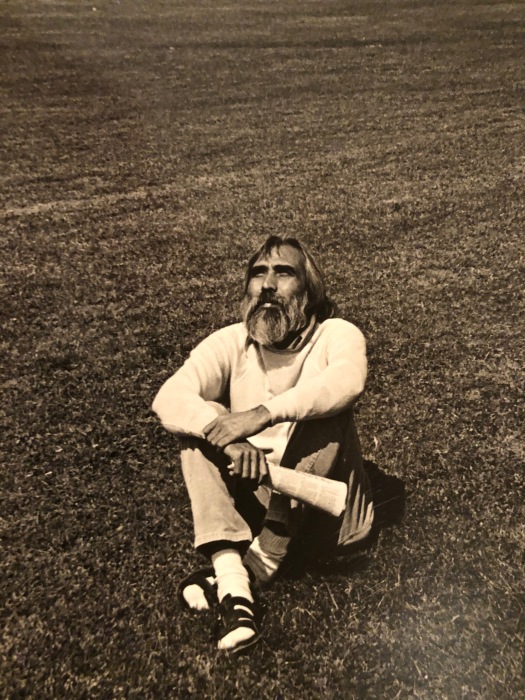 Surinder Singh Sidhu, 81, from Ithaca,  entered into the beyond within peacefully, Sunday, March 1st, 2020 of chronic pulmonary impairment, surrounded by a roomful of family at Our Lady of Lourdes Memorial Hospital in Binghamton, New York. Additional family also gathered in California and Hawaii to send continuous blessings and love throughout his transcendence. After a long, full day of bedside grieving, Bible readings and sacred Gurbani prayers, close to midnight Sunday the somber mood unaccountably shifted as family suddenly felt the urge to share humorous anecdotes. Surinder's stilled breathing went nearly unnoticed at the exact moment when family were heartily laughing at classic jokes from his rebellious college days in India. Startled, the family turned to refocus attention on the breathing pause. Then came three brief nods with three extra breaths that seemed at first an implausible joke, but that his three daughters suddenly knew were meant as benediction and assurance of his protection to them in his farewell moments.

This blending of sacred and secular rings a bell with anyone familiar with Surinder's personality. Alongside his relaxed priorities of joyful relationships and philosophic marvel at life's mysteries, Surinder also achieved significant educational, personal and professional milestones. He graduated first in his class with a major in Directing from The National School of Drama and Asian Theater Institute in New Delhi and received the Grish Ghosh Award in Directing. He was awarded a graduate study fellowship to Cornell University, where he met his wife and companion of 50 years, Debbie Elam. They got married in 1973 in India amidst family blessings and raised three daughters in Ithaca. Surinder earned a Master of Arts Degree in Theater from Binghamton University and later taught for 20 years as an English professor at Tompkins Cortland Community College (TC3) in Dryden, NY. His Acting 101 class taught much more than just acting, and former students throughout the community say it changed their lives. He also opened Mandala, Ithaca's first Indian Restaurant, and its offshoot Ithaca Masala at the Farmers Market where the whole family cooked and served delicious vegetarian Indian dishes. In the last 10 years he has taught Sunday Meditation Class at Rasa Spa in Ithaca.

Surinder is survived by his wife Deborah "Debbie"; his three daughters Sujata Sidhu Gibson (Carl), Sophie Sidhu (Hasan) and Gitanjali "Gita"; and three granddaughters: Liliasha, Julia and Neela; his brother Paramjeet "Bill" Sidhu and his five sisters Ravinder, Rajinder, Kuldeep, Prit Pal "Goodie", and Harpreet "Gogi" and their spouses and families, as well as by other closely connected family throughout his life.

During Surinder's year long hospitalization, a few special visitors and innumerable well wishers brightened his days. To you he sends a warm squeeze of your hand, a long  deep look of recognition, acknowledgement and love, a lift of his eyebrows, and one of his well remembered radiant smiles. Thoughts shared by many are expressed by a friend's words to his daughter: "Your father was a good and gentle man. I always enjoyed his presence and conversation. May the light within him guide his way home."

Those who want to make charitable contributions in his honor or to light a free virtual candle in Surinder's name may go to www.gratefulness.org which is a site connected to his very dear lifelong friend Brother David Steindl-Rast, a Benedictine monk  who always enjoyed Surinder's spiritual insights and playful jokes.

To order memorial trees or send flowers to the family in memory of Surinder Singh Sidhu, please visit our flower store.