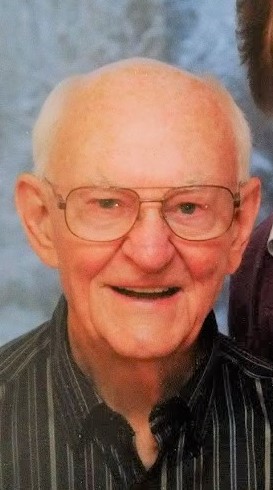 Russell Dean Sprague of Lansing died on January 20, 2020, at the age of 92.  He was born in Rochester, NY, to William Delos and Mary Axelby Sprague.  The family moved to Little Valley in southwestern New York in 1937.  Russ graduated from Little Valley High School in 1945.  Two days after graduation, he started basic training at Sampson Navy Base on Seneca Lake. He served on the light cruiser USS Philadelphia.  After the war, he entered Cornell University College of Agriculture, receiving an associate degree in 1948.

In 1951, Russ married Mary Doyle of Salamanca.  Together they had four daughters.  His first job was as a salesman of Ford Tractor products.  In 1953, he left the farm machinery business to work for the Equitable Life Assurance Society of Utica.  Eight years later he became the general agent for Massachusetts Mutual Life Insurance Company in Binghamton.  In 1982, he became an independent agent representing many companies offering life, health and disability insurance.

Russ was an active community volunteer.  He was a member of the Binghamton and Ithaca Rotary Clubs for over 43 years.  He served as President of the Binghamton Rotary in 1989.  He was Campaign Chairman for the United Way of Broome County in 1970.  He also served as Capital Campaign Chairman for the Good Shepard Fairview Home of Binghamton.  He was an active member of the Broome County Chamber of Commerce and a member and elder of West Presbyterian Church of Binghamton.

Russ had many hobbies.  He was a licensed pilot and owned his own airplane – a 4 seat Cessna 182.  He was an avid skier, cruising the slopes of over 50 ski areas in the US and Europe.  He enjoyed biking.  Russ moved to Ithaca in 1993 to join his new partner, Kelly Behan.  When she retired, they spent 10 years exploring the North American continent in their motorhome.  Russ’s real passion was people.  Every person he met was special to him - always acknowledged by their name and given a friendly comment, a joke or a perfumed penny.  Handwritten letters were mailed every day and there were always phone calls to be made.  His goal was to bring joy into the life of everyone he encountered each day.

The family sends a heartfelt thank you to the staff at Groton Nursing Home for their loving and wonderful care to Russ during his time with them.  A memorial service in Binghamton, NY, will be announced at a later date.

To order memorial trees or send flowers to the family in memory of Russell Dean Sprague, please visit our flower store.