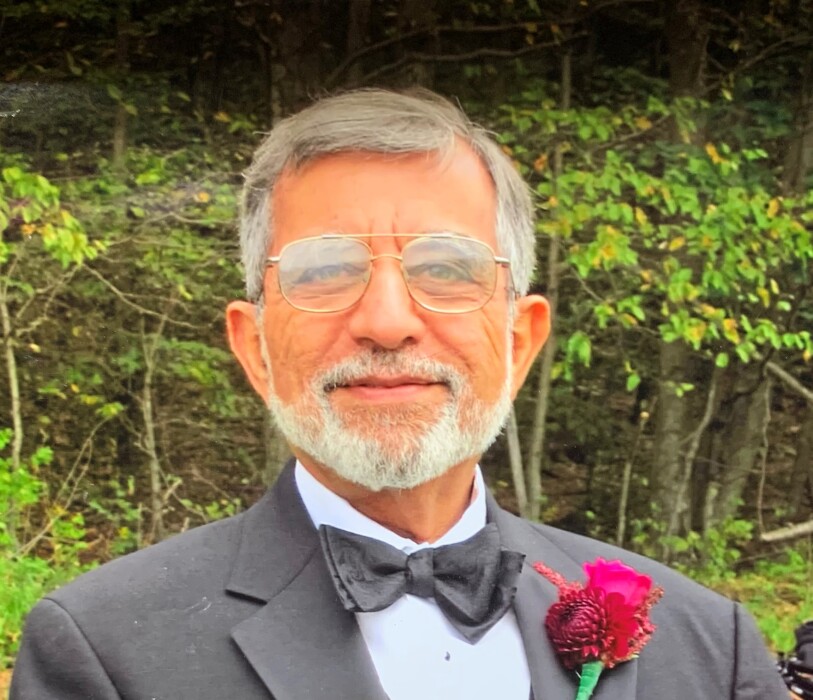 Nariman Burjor Mistry was born in Mumbai, India, on October 21, 1937 to Burjor and Jer Mistry. In 1964, he married Virginia (Gin) Garland, and they had four children: Roshan, Manek, Premila, and Jal. The couple celebrated their 57th wedding anniversary on June 21, 2021. Nari died at home on July 1, 2021, enfolded in the love of his family.

Nari received his undergraduate degree in physics from St. Xavier’s College in Mumbai, and then spent two years doing research. He came to the US when he was 21, arriving in New York City on the ocean liner Ile de France. He did graduate work in physics at Columbia University, and received his PhD in 1963.

While attending Columbia he worked on a project studying neutrinos. The three professors leading this research were later awarded the Nobel Prize in 1988, and Nari and Gin were honored and excited to travel to Stockholm to attend the awards ceremony.

Nari began work at Cornell University in 1964 and worked there for 39 years. His career focused on particle physics, and he worked with his colleagues at Cornell’s synchrotron (particle accelerator) to study the fundamental properties of matter and energy. He was an active member of the Radiation Safety Committee, and served as chairman for many years. Nari also enjoyed teaching graduate students, and traveling to other countries to work at other facilities.

He shared many wonderful tales of his travels, and took pride in his punctuality: he happily related the story of arriving for a meeting in Moscow just on time, having taken a plane, train, and bus, despite weather problems and travel delays.

Nari retired from Cornell in 2003 and then pursued a second career as a self-taught artist. He painted watercolor landscapes, scenes around Ithaca, and birds, among other subjects. His work appeared in regional galleries and he was an enthusiastic participant in the Greater Ithaca Art Trail.

Nari also loved music. He played piano and encouraged his children in their musical interests, often accompanying them. He was a member of the board of the Cayuga Chamber Orchestra and served as its president for some years, inspiring many people who enjoyed the orchestra’s concerts.

Nari was a Renaissance man. In addition to his work, his lifelong devotion to the piano, and his other artistic achievements, he enjoyed gardening, bird watching, canoeing, sailing, cross-country skiing, hiking, camping, and traveling. He was extremely well-read and he enjoyed learning new information and understanding complex problems on any topic. He was also an adept mechanic, plumber, electrician, and carpenter, and he was the go-to person for any home repair.

But Nari’s greatest pride and satisfaction came from his family. He had a deep love for his wife, children, and grandchildren. He was close with his siblings in India and Australia, and with other extended family members around the globe.

He was a very active father, always interested and very proud of his children. He delighted in his grandchildren: he told them stories, drew pictures, taught them about nature, made videos, and truly embraced his role as “Papa.” Nari also shared his love with the many foster children he and Gin cared for: Shireen, Christina, Amber, Kimmie, Brittany, Elisabetta, and Lacey.

When reflecting on his life, he expressed his hope that he’d taught his children morality, integrity, honesty, and pride in their accomplishments. This, he said, was more important to him than any of his other professional or personal achievements.

Nari is survived by the love of his life, his wife of 57 years, Virginia, of Ithaca, NY, his children, Roshan (Eric) Swope of Harrisville, NH, Manek (Jodi Backlund) Mistry of Olympia, WA, Premila Mistry of Washington, D.C., and Jal (Stephanie Lee) Mistry of East Greenwich, RI.

He is also survived by his grandchildren, Maya, Molly, Eliana, and Abigail; by his brothers, Jangoo (Firdaus) Mistry and Ronnie (Armaiti) Mistry; by his brother-in-law Shahrookh Tafti; and by many cousins, nieces and nephews. He was predeceased by his parents, his sister Gulnar Tafti, and his granddaughter Ayla Mistry.

Family and friends are invited to gather in Nari's gardens on Thursday, August 5, 2021, from 2:00 to 4:00 p.m. In lieu of flowers, please consider a donation to Doctors Without Borders, a cause Nari cared about throughout his life.

To order memorial trees or send flowers to the family in memory of Nariman B. Mistry, please visit our flower store.