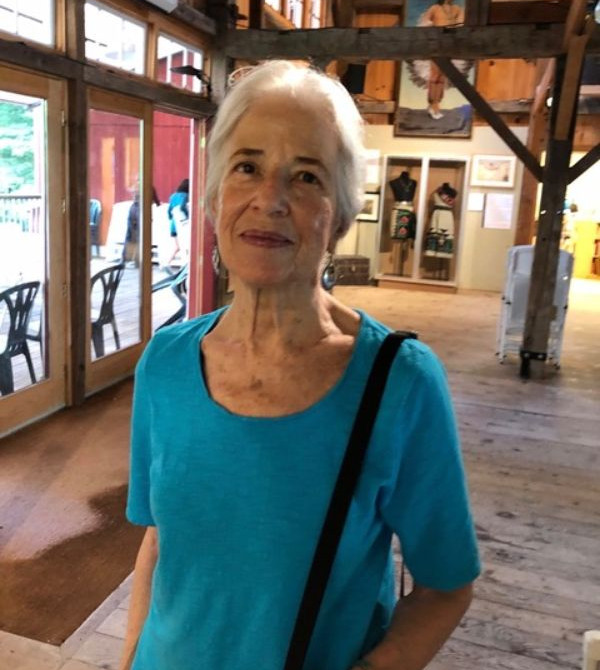 Viola Margarethe Nadejsda Creamer, known to all as Nadia, passed away suddenly and unexpectedly on June 9, 2022 at her home in Easthampton, MA.  She was born in Kaunas, Lithuania, on December 12, 1937, and immigrated to the U.S. with her parents in 1939 as they sought to escape Europe during World War II.

They lived in Massachusetts and Pennsylvania during her youth.  As a young mother, she lived in Biddeford, Maine with her husband at the time, David Dunlap.  She lived in several places following David’s death in 1957, then moved to New York City, where she lived from 1960 – 1988.  In 1966, she had a chance encounter with an old friend, Richard “Dick” Creamer.  They married in 1967 and had an intensely loving marriage until Dick’s death in 2013.  Each was the other’s truest soul mate.

After vacationing in upstate New York while still living in NYC, they decided to move permanently to Rensselaerville, New York in 1988.  From a loft on the Bowery in NYC to a house in the woods!  They remained in Rensselaerville until Dick’s death in 2013, after which she moved to Westfield, Massachusetts, and then Easthampton, Massachusetts.

Throughout her life Nadia was a dancer.  While in NYC, she studied at the advanced level with well-known modern, jazz and ballet dance companies including Martha Graham, Paul Sanasardo, American Ballet Theatre, Joffrey Ballet, Alvin Ailey, Charles Weidman and others.  She choreographed and performed with the Alain Germain Ballet Theatre Musicale and the Charles Weidman Theatre Dance Company.

She received her Master’s Degree in Dance Therapy from New York University in 1980, and was a registered member of the Academy of Dance Therapists.  She was interested in working with people of all walks of life and those who experience challenges along the way.  She conducted dance therapy sessions for heavily compromised young children, taught performing arts courses to learning disabled adults, served as a substitute teacher for adolescent, medium security incarcerated males, as well as providing dance therapy sessions on a private basis. She was a Senior Dance Therapist at Bellevue Psychiatric Hospital in NYC for 7 years until they moved upstate.  She taught theater and dance at Columbia-Greene Community College from 1988 – 2011.

Together, Dick and Nadia founded the Impulse Theatre and Dance Company in 1980.  They directed, produced and performed many plays, taught dance, acting and theatre.  She choreographed, produced and performed in dance concerts and musicals.  They began this work during their time in NYC, and continued in Rensselaerville until 2005.  They involved community members of all ages in various facets of their productions.  They were recognized for their many contributions in 2013, receiving the Rensselaerville Historic District Association’s Founder’s Day Award.

After Dick’s death, Nadia remained very active and engaged in life.  She formed a discussion group called Hot Topics, bringing together individuals with differing opinions.  The group’s mission was to discuss controversial topics in a civil and respectful manner, while getting to know each other as individual humans.  She never lost her love of movement and dance even as her body’s abilities were diminishing.  She had begun a new effort, the Expressive Movement Outlet, in which she worked with individuals on innovative approaches to expressing themselves through movement.  She continued this project through her final days.

Her friends and family will all remember her as a dancer, and as a fierce individualist.  She did not much care what people thought of her, as long as she felt she was making the right decision.  Among the many sayings and notes posted in her home was this: “I’m not afraid of dying – I’m afraid of not living”.  And live she did, fully and joyfully.

Nadia was loving mother to her daughter, Denise Kushmerek and husband Edward.  She was the beloved Oma to her granddaughters, Katie Goscinski (Andrew) and Maureen Hawe (Aaron Burke).  Her burial was held privately on June 14th at Greensprings Natural Cemetery Preserve in Newfield, NY.  A celebration of her life will be held in spring, 2023.

Anyone wishing to make a donation in her memory can consider these organizations which had long been at the top of her list: