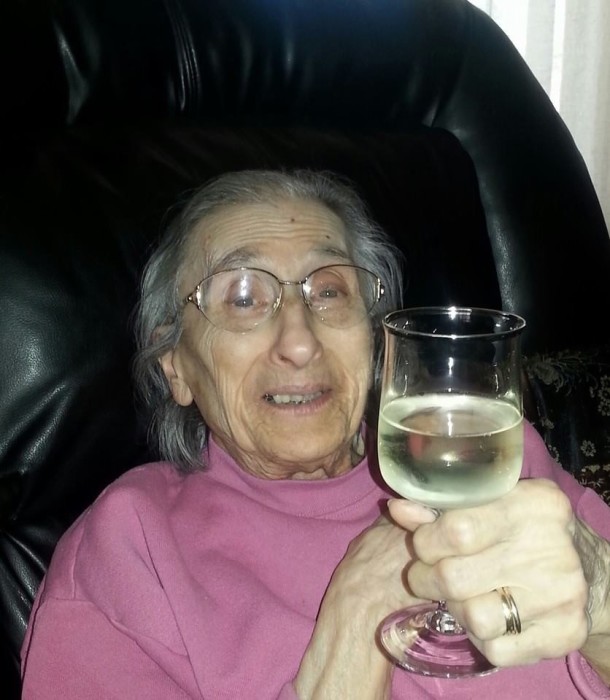 Mary Latini Pellicciotti passed away peacefully at the Oak Hill Manor Nursing Home in Ithaca, NY on Monday, December 16, 2019 (exactly one year to the week after the death of her son, Joe). Mary was born 102 years ago on October 6th in Sayre, PA to Angelo and Paolina Latini. Mary grew up in a closely knit ethnic neighborhood, where singing, dancing, lots of laughter and the finest Italian cooking prevailed. Mary and her 6 siblings survived the Great Depression by harvesting their ample vegetable gardens. Mary sent 3 of her brothers off to WWII and worked in a local factory after graduating from Sayre High School with the class of 1935. In 1944 she met her future husband Michael Pellicciotti and she and Mike settled in Cortland, NY, where she resided until after his death in 1987 when she moved to Lansing. Mike and Mary had 2 children and her family became the focus of her life. She was a loving and devoted mom. She considered her children to be her greatest accomplishment and she was very proud of their academic achievements. Her daughter, Diane became a teacher and Joe was an attorney and college administrator/ professor.

Mary is survived by her daughter, Diane Kone (David) of Eustis, FL; her brother, Gino Latini of Ballston Lake, NY; a daughter-in-law, Mary Beth Pellicciotti of Spokane, WA; 3 grandchildren, Amy Phanhthalath of Lansing, Michael Pellicciotti of Olympia, WA, and Annie Pellicciotti (Ryan Steel) of Melbourne, Victoria, Australia. She leaves her treasured great granddaughters, Mya, Alea Mary and Makenna Phanhthalath, all of Lansing. In 1994, she suffered her greatest loss, the death of her 12 year old granddaughter, Paula Mary Daniels. In addition to her husband and Paula, she was predeceased by 5 siblings: Anne Struble (Bill), Dr. Ferd Latini (Betty), John Latini and Eleanor Jolley (Richard) all of Sayre, PA, and a brother Ezio Latini (Rita) of Philadelphia, PA; and several nieces and nephews and their families.

There are no calling hours and a memorial service will be private at St. Mary’s Cemetery, Cortland, NY, at a later date.

To order memorial trees or send flowers to the family in memory of Mary Pellicciotti, please visit our flower store.