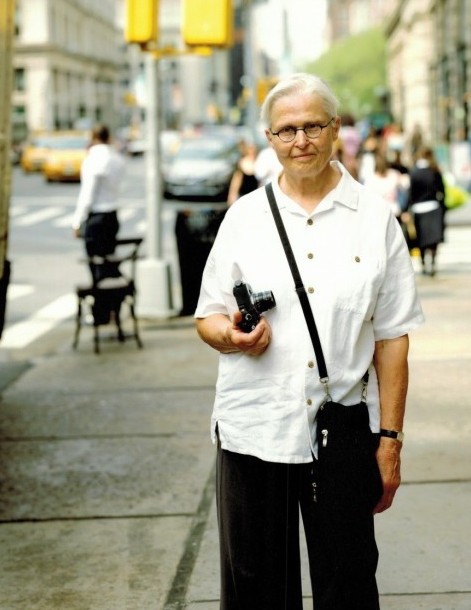 There was seldom a task that Linn Underhill would not take on, and if she wasn’t completely certain about how to accomplish it, she would act “as if.” From crafting a beautiful mahogany dining table to painting her own de Kooning original when she needed a prop, building a grape arbor, to exploring Auden in the last month of her life, Linn was a doer. She moved through the world with intellectual curiosity, humor, generosity, and love that made a lasting impression on everyone she met.

Linn died on May 3rd at her home in Lisle, NY at the age of eighty-two. She was born on August 8, 1936 in Sutter Creek, California, the second of four girls. Her father, Dwight, who died early and who Linn adored, was an engineer, and taught Linn how to shoot a gun and skin a rabbit. Linn’s mother, Carol, was a photographer, and it was by her side that Linn was introduced to the art and craft of photography. As a young woman Linn began architecture school at the University of California at Berkeley, where she met Bill Underhill, to whom she was married for almost 20 years.  She took a 15-year hiatus from her studies to raise her three children—Sarah, Joe, and Kate—as they moved from California to New Mexico to Connecticut and Brooklyn, before settling in Alfred, NY.  She was an amazing mother who bestowed upon her children a life as full of love and adventure as anyone could hope for.

Linn’s study of photography began in the 1950s with Dorothea Lange and John Collier. After raising her children, she returned to school to study photography and bookmaking at Visual Studies Workshop in Rochester, NY, receiving an M.F.A. in Photographic Studies in 1982. Linn was a member of the Colgate University Art and Art History faculty from 1992 until 2017, when she retired at the age of eighty. Her passion for teaching inspired students and colleagues alike. Linn taught students at Colgate solid photography skills, challenged their thinking, and for some, changed their lives forever. In the classroom, she created an environment that provided transformative studio experiences and fostered seminal discussions about the practice of being an artist. Her curatorial projects were classrooms of another kind; Suddenly Older, Land of the Free, and BANG were exhibitions in the Clifford Gallery and RECTO/VERSO, the first retrospective of internationally acclaimed artist Ann Hamilton’s video works, was installed in the Picker Gallery when Linn served as interim director.  A prolific artist, Linn’s photographs are rigorous, direct, and passionate explorations of issues of domesticity, gender, and aging, often with her lens set on working against cultural conventions. She saw photographs as something that can distill the world down to its essence, focus our attention, and allow us to tell a story a little differently. Linn lectured widely, and her work is included in several publications, including Reframings: New American Feminist Photography. She received several national and local grants and fellowships, including two major NEA grants. Linn’s work has been exhibited in museums and galleries nationally, and is in numerous collections, including Colgate’s Picker Gallery and The Fogg Museum, Harvard University. Redefining concepts of aging, agency and the body, Linn’s 2016 photographic series was the subject of artist and writer Susan Silas’ recent essay Linn Underhill: Analogue Body Extraordinaire.

Linn met her life partner, the painter Ann Carter, in 1989 while teaching at Rutgers University. They had a commitment ceremony in 1991 (since New York did not recognize same-sex marriage at the time). They enjoyed many rich and wonderful years together in the house and studio on Oregon Hill, with trips to Italy, time together reading and working, travels around the country, and many hours with dear friends and family.  They were married in a small ceremony in February 2019, and Ann provided incredibly loving care for Linn right up to the end.

When Linn was diagnosed with metastatic cancer in late January, she faced this daunting challenge just as she had faced other hurdles, with courage and determination. She spent the first few weeks being in touch with people that had shaped her childhood, rekindling formative connections, listening to Michelle Obama read her autobiography, and trying to perfect buttermilk biscuits. Increasing fatigue and confusion finally left Linn unable to use her camera or walk alone, and she realized that her life was soon to end. But even amidst the profound fatigue, Linn found the strength to speak a few words when loved ones called, sing “Happy Birthday” to Joe, or say, “Wow” when one of the grandchildren shared an adventure. This was Linn, almost always able to dig a little deeper.  She will forever be remembered for her love of books and music, her laugh, the best Christmas rolls ever, the legacy of the life history she expressed in her art, and for her fierce and indomitable spirit.

For more information on Linn’s life, work and death visit:

In lieu of flowers donations may be made to one of the following:

The Cornell Lab of Ornithology

or to a cause that you think is reflective of Linn's life and values.

To order memorial trees or send flowers to the family in memory of Linn Baldwin Underhill, please visit our flower store.