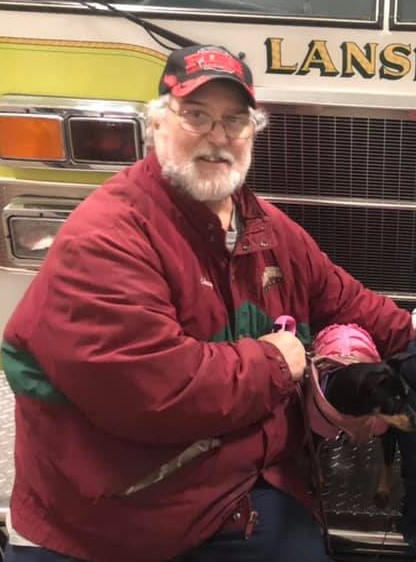 Lawrence “Larry” John Creighton, 57, of Lansing, NY, lost his battle with cancer on Thursday, March 18, 2020. Lawrence was born in Harvey, Illinois on November 28, 1962 to Stephen and Rose (Wachdorf) Creighton. He was a generous and thoughtful man, who would do anything to help others.

Lawrence worked for Ithaca City School District for over 34 years before retiring in January 2018. He was proud of his role as Union President, and fought hard for his fellow co-workers. He bravely served as a Volunteer Fireman with the Lansing Fire Department for 25 years. His 16 years as Fire Commissioner were, to him, an honor. He was a selfless servant to the community.

Lawrence is survived by his two children, April-Mae P. Kidd (Corey) and Lawrence John Creighton II (Alissa), and several brothers and sisters. He also leaves behind three grandchildren, Makenzii, Corey, and Cameron, who meant the world to him.

In lieu of flowers, the family requests memorial contributions be directed to either Lansing Volunteer Fire Department, 80 Ridge Road, Lansing, NY 14882, or Adana Veterinary Clinic, 87 Brooklyn Road, Freeville, NY 13068. The family of Lawrence Creighton wishes to thank Bangs Ambulance who went above and beyond to bring him home to his community.

To order memorial trees or send flowers to the family in memory of Lawrence John Creighton, please visit our flower store.