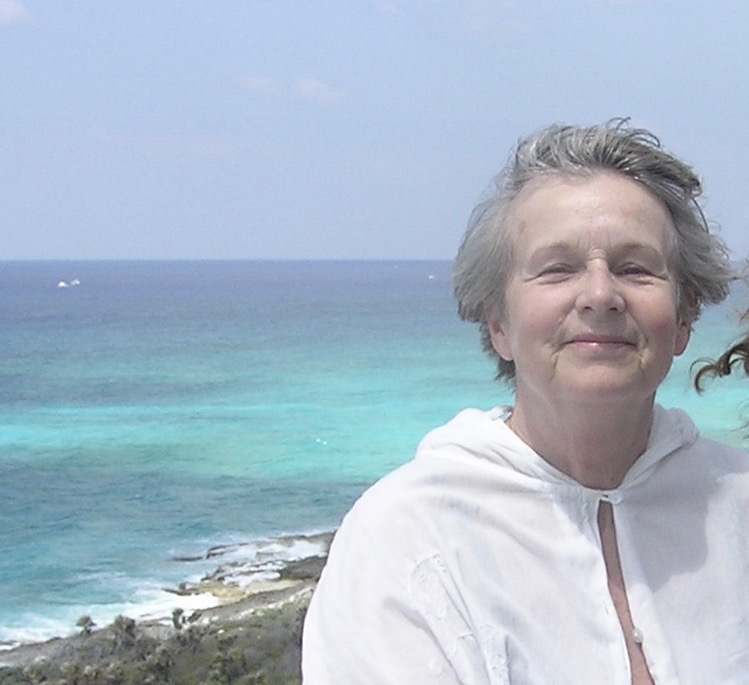 Kathryn Dyal Anastasio died on September 8, 2019 in Corning, NY.  Kathy was born in March 1942 near East Orange, NJ, to Thomas and Marguerite Dyal, the second-youngest of her four siblings (Thomas, Anne, David, and Jimmy).  She grew up in a beautiful home in East Orange, riding fancy cars and horses. As a student and Kappa Alpha Theta at Penn State, she was interested in marine biology, but plans changed when she met a dashing Peace Corps volunteer who was soon to depart for the Philippines.  After six months of corresponding, he convinced her to move across the world rather than finish college: she and Frank Anastasio married on the tropical island of Samboan Cebu soon after.  They then spent two years in the Philippines, living with the locals and dodging giant, terrifying spiders in the outhouse. (Years later, her sons tried to cure her arachnophobia by hanging spider mimics at head height in the dark staircase of her first Powderhouse home.  Despite years of trying, it never did work.)  At the end of their time in the Far East, Kathy and Frank did a grand world tour, traveling through Asia and the Middle East, then scootering across Europe on a Lambretta bought in Rome.  Stateside, they spent a year in Columbus, OH where their first son (Cort) was born.  Three months later, the family worked the summer at Camp Madison-Felicia in Peekskill, NY, and then drove to Corning in the Fall.  Driving into town for the first time, Kathy burst into tears, not because of the natural beauty of the valley, but because she was convinced she’d never be able to drive up the hills in winter.  Yet she quickly mastered the skill of not stopping on the way up, grew to love the area and its people, and never left.  Sons 2 (Alexi) and 3 (Thomas Anthony Becket) were born over the next several years as the family settled on Willow Street in South Corning.

Around 1971 the fivesome moved to East Fourth Street in Corning, where they were surrounded by great neighbors and lots of kids. It was a time of long hair, bell bottoms, and Wine Festivals at CCC. In 1972 she and Frank pawned off the boys to three sets of unsuspecting friends and relatives and took a European vacation, returning with a Volvo station wagon (the only new car she ever bought) the day before the Corning flood. 1975 brought seismic change, as Kathy’s marriage dissolved and she took up with a dashing radio DJ and guitarist, Bill Groome, living in a series of very small apartments that creatively slept five.  Kathy and Bill found housing nirvana in 1978 when great friend Karen Biesanz sold her house on Powderhouse Road to Kathy.  Despite having very little money, life was good and filled with fun and games.  Around 1979, Kathy was able to give her sons the greatest Christmas gift possible in that decade: an Atari 2600 video game console.

Kathy loved her family, walking, reiki, gardening, collecting art, music, wine, stories, finding coins, and Scrabble. Like all of us, she embodied the contradictions of the human spirit: generous, cranky, loving, rude, bold, fearful. Between 1970 and 1987, experts estimate she made a total of over 6000 brown bag lunches for her sons in kindergarten through 12th grade, each with a hand-drawn heart and expression of love on the napkin.

Kathy worked for the Corning-Painted Post school district for roughly 35 years, first at the district office calling substitute teachers before dawn and later at East High School as a receptionist, secretary, and adviser for the photography club.  She was also a dedicated member of the Naval Reserves for 17 years, rising to the rank of Chief Petty Officer.  She loved going out to lunch with her friends and co-workers and she and Bill were long-time members of a lively dinner group.

According to her wishes, she will be laid to rest in a hole on a hill near Newfield, NY in front of family.  She goes to her grave never revealing which son was her favorite.  Smart money is on her youngest, who did more for her than you could imagine, or the middle born, who was her faithful interstate lottery friend and phone companion.  Still others believe daughter-in-law Melanie was secretly number one, a result of her decades of help, wise counsel, and ongoing work to socialize the introverted youngest son.

Kathy was predeceased by her parents, two brothers (David and Jimmy), and East High School.  She is survived by Bill, Frank, her 3 sons, 3 daughters-in-law (Melanie, Stephanie, and Ann), 4 beloved grandchildren (Seneca, Ellis, Andrea, and Teo), and the West End Gallery.  Reader - even if you think your story will have a different ending, it won’t.  Dust to dust. So give someone a hug, be kind, and do something good in this world.

To order memorial trees or send flowers to the family in memory of Kathryn Anastasio, please visit our flower store.