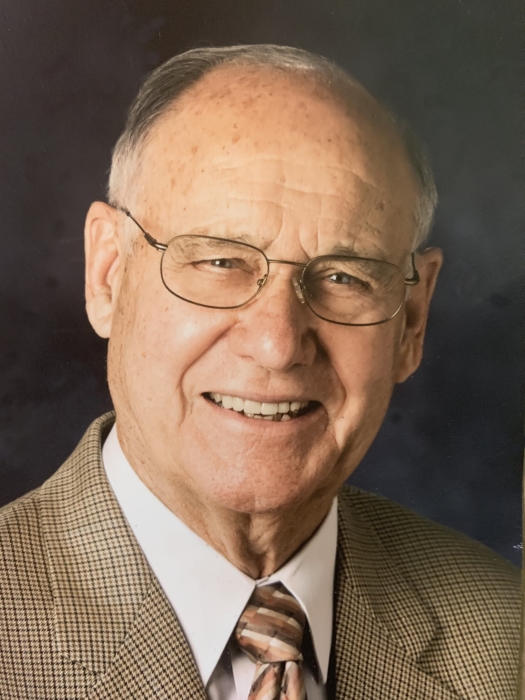 On December 29th, 2018, James R. Shreve passed peacefully surrounded by love and family at Brittany Pointe Estates, in Lansdale, PA.  A loving husband for 68 years, “Coach Shreve” was the father of three sons.  He was born in Plainfield, NJ, son of John Donald and Helen Shreve of Fanwood, NJ, in August of 1926.

He graduated Scotch Plains High School (1945) where he was a three sport star, and was recognized as First Team All-State selection in both football and basketball. He was inducted into the Scotch Plains-Fanwood High School Hall of Fame (2006).  After high school, he accepted a scholarship to attend Syracuse University.  He played on the basketball team at Syracuse (45-46), and the football team (48-50) for Ben Schwartzwalder.  He served his country in the US. Army from 1946-47.

A dual position player on the football team, he excelled as a defensive back, and held the Syracuse school record set in 1950 for most interceptions at that time.  He graduated from Syracuse in 1951, with a BA in education.   It was at Syracuse that he met the love of his life, Dorian Lloyd Shreve, of Buffalo, NY, and they had a wonderful, loving marriage of over 68 years. Jim’s frequent quote, “my marriage to Dorian was the best decision of my life.”

In 1951 he embarked on a stellar coaching career at Moravian College in Bethlehem, PA, where he was the youngest Head Coach in the country.   He also coached at George Washington, Lehigh, Syracuse, Iowa State and Cornell Universities.  At Lehigh, the Engineers won the first Lambert Cup trophy in 1958. He was appointed Head Lacrosse Coach at Lehigh in 1959 and guided the team to a National Championship. That same year, he accepted an offer from Syracuse as the Director of Recruiting and Head Freshmen Football coach. His first year at Syracuse, the Orange went 11-0 and won the National Championship. Two national championships at different colleges in the same year is family legend.

After a freshmen record of 36-4, he became the backfield coach, and was an integral part of the dominant Syracuse teams of the 1960’s. During his 14-year tenure at Syracuse, he is credited with recruiting many great athletes that left an indelible mark on the program.  He coached many great players at “The Cuse,” such as Ernie Davis, Larry Csonka, Floyd Little, and John Mackey. Coach Shreve recruited Tom Coughlin (NY Giants Head Coach 2004-2015). “The Jim Shreve Show” became a weekly broadcast on WHEN-TV. He also contributed to the production of the movie “The Express”, as a consultant. Jim was honored to be inducted into the Syracuse Lettermen of Distinction on October 12th, 2007.

He was a man of integrity and was a respected member of the AFCA for over 35 years. He will be remembered most for his warm, engaging demeanor. He had an innate ability to make everyone feel welcomed, respected, and important. In retirement, Jim and Dorian lived in Ithaca, NY, for over 35 years. Active in the real estate market, he loved Ithaca and their many friends and neighbors. An avid reader, a big Cubs fan, a lover of birds, Jersey shore vacations, and following Syracuse Athletics were life’s joys. He was a 20 year member and past president of the Ithaca Cayuga Rotary Club.

Jim will be reunited in heaven with his son Kirk, who predeceased him in September, 2006, and two brothers, Wister and Donald Shreve.  His legacy will live on with those who survive him: sons James (Beverly) Shreve of Wilmington, DE;  Michael (Janie) Shreve of Bethlehem, PA; and his sister, Barbara Kelly of Bethlehem, PA.

In lieu of flowers, contributions in Jim's memory can be directed to JDRF or the American Cancer Society.

To order memorial trees or send flowers to the family in memory of James R. Shreve, please visit our flower store.