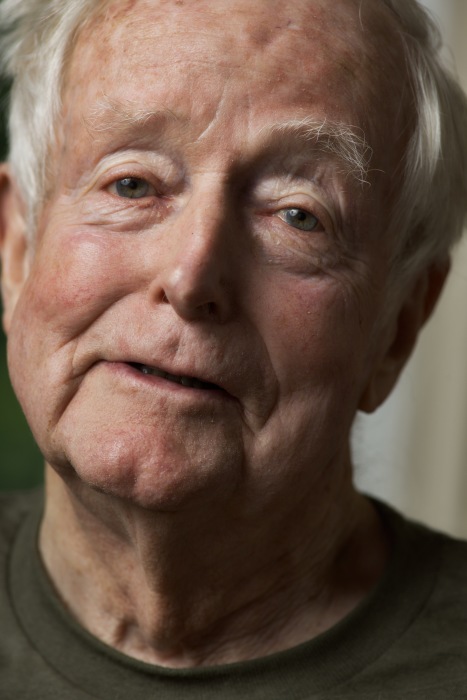 Acclaimed writer and professor James McConkey died peacefully in his home on Oct. 24, 2019 at the age of 98. He was buried at Greensprings Natural Cemetery on October 28, next to his late wife Gladys and son Cris.

Goldwin Smith Professor of English Literature Emeritus at Cornell University until he retired in 1992, McConkey was a beloved teacher and mentor for more than four decades.  He fostered many gifted writers who flourished under his keen and kind tutelage.  His own career as a writer spanned almost 50 years encompassing 15 published books as well as numerous essays in The New Yorker and The American Scholar.  He was a critic, biographer, scholar, editor, short story writer, essayist, and novelist.

But James McConkey will be best remembered as the creator of a unique form of writing, what he at one point called “autobiographical fiction,” and later “life writing,” a magical, almost mystical weaving of his memories into transcendent truths.  In 1960 he experienced an epiphany that was “the basis for the kind of writer and person I became. It really changed me.”  That moment was precipitated by the sense of desperation he felt at the resumption of nuclear testing by first the Soviet Union and then the United States.  Abandoning conventional third-person narratives, he began searching for intuitive relationships between “intimate experiences, through memory, and personal observation.”  “

Whatever my wish,” he wrote, “I had not escaped fiction; I had simply made myself the central character of a story, finding in my own experiences and dreams a greater authenticity than I could in those of any character I might invent.”  Through the years he built a personal and powerful narrative of his life and of those around him.  It is a legacy within which his voice remains sharp and clear.  What shines through is the man himself:  kind, generous, witty, thoughtful, modest, humane.  An exemplary teacher, he maintained personal and creative relationships with many grateful students until the day he died.

Born in Lakewood, Ohio in 1921, McConkey attended Cleveland College and served as a U.S. Army infantryman during World War II.  Injured during the war, he was discharged in November 1945 and earned his bachelor’s and master’s degrees from Western Reserve University (later Case Western Reserve) in 1946 and a Ph.D. from the University of Iowa in 1950. Before coming to Cornell, he taught at Morehead State College in Kentucky, where he founded and directed the Morehead Writers Workshop.  After arriving in Ithaca in 1956, he became instrumentally involved with the new creative writing program and Epoch magazine, as well as the English department at large, where he taught courses in modern fiction and nonfiction.  In 1965, McConkey founded the Cornell Council of the Arts and initiated the popular Mind and Memory course and its related lecture series in 1996, exploring creativity across various disciplines. In the late 1970s, he organized one of the most memorable cultural events in Cornell history, the Chekhov Festival.

McConkey was the recipient of a Guggenheim Fellowship in fiction and a National Endowment for the Arts Creative Writing Fellowship award in 1969, and an American Academy and Institute of Arts and Letters award in literature in 1979.  A former student established the McConkey Master of Fine Arts Creative Writing Award in 2008.  His collected papers (1948-90) are housed in Cornell University Library’s Division of Rare and Manuscript Collections.

James McConkey was predeceased by his wife of 68 years, Gladys McConkey, a former research chemist and editor of The Engineering Quarterly at Cornell, who died in 2013.  His second son, Cris McConkey, a passionate advocate for social justice and environmental causes, died in 2015. His nephew Dale Steigerwald, who lived with James, died in 2018.  Survivors include his son Larry McConkey and wife Diana, son Jim McConkey and wife Kristin, grandchildren Katie and Braeden, several nieces, a cousin and countless friends including Mike DeMunn, who lives on the property, and his beloved dogs, Buddy and Bernie.

The Cornell Department of English is planning a memorial service to be announced at a future date.  Contributions in his name can be made to: Greensprings Natural Cemetery Preserve, PO Box #415, Newfield, NY 14867, or online at www.naturalburial.org.

To order memorial trees or send flowers to the family in memory of James R. McConkey, please visit our flower store.