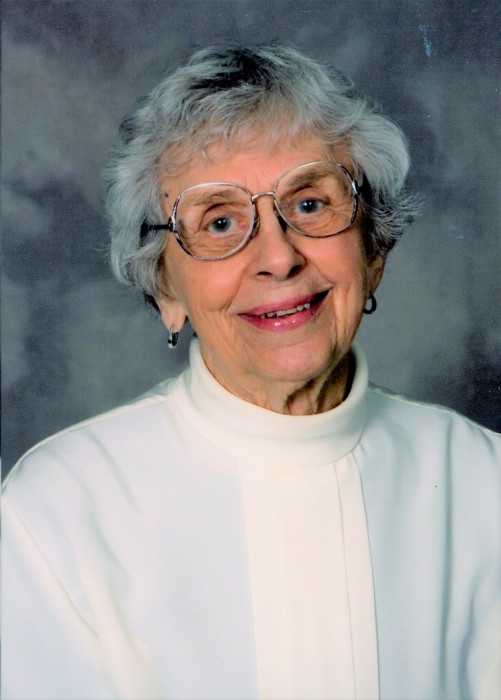 Jacoba Munson Baker passed away peacefully at her longtime home on Auburn Road in North Lansing, NY, on May 11, 2019, just a couple months shy of her 99th birthday.

Jacoba was born in Lansing, NY, on July 6, 1920. She graduated from Groton High School and continued her education, earning a bachelor’s degree in home economics from Michigan State University in 1943. She returned home after graduation and got a job with Cornell Cooperative Extension, where she met a young extension agent, Robert C. Baker. They were married in 1944 in Groton.

Jackie and Bob moved to State College, PA, shortly afterward for Bob to work on his master’s degree at Penn State, and to Purdue University in 1956 for Bob to earn his PhD in poultry science. In between, in 1950, Jacoba and Bob started Baker’s Chicken Coop at the New York State Fair, which is still operated by her children and grandchildren. The two also started Baker’s Acres, a plant nursery in North Lansing. Jacoba had a lifelong passion for gardening, and Baker’s Acres allowed her to pursue her love of horticulture as well as financially support the operation of their 75-acre farm during retirement. Baker’s Acres is still operated by her daughter Reenie.

Jacoba’s life was centered in the Lansing area, where she was very active in the Lansing United Methodist Church and many other civic organizations. Additionally, she and Bob had numerous opportunities for worldwide travel due to Bob’s consulting work in food science and new product development. Bob’s many international graduate students became lifelong friends to Bob and Jackie, keeping them in touch with worldwide events.

Jacoba is survived by her children Dale (Maureen Cowen) of Lansing; Kermit (Joan Barth) of Natick, MA; Regina Robbins (Kelly) of Knoxville, TN; Maureen Sandsted (Jeff) of Lansing; Johanna of Lansing; and Karen Applebee (Jody) of Towanda, PA; along with 12 grandchildren and 13 great grandchildren, and her brother Fred C. Munson (Mary) of Manchester, MI. Her second son, Mike, died in 1969.

Jacoba is also predeceased by her husband, Bob, who passed away in 2006, and her siblings Cornelia Downie, Mary Benson, Jasper Munson, and Philip Munson. Her father, J. Paul, was born on Munson Road in Lansing, where he lived most of his life. He was working at the American University of Beirut when he met Jacoba’s mother, Johanna Huffnagel, a native of Utrecht, Netherlands, who was at the time employed abroad as a governess. Married in Syria, Paul and Joh returned to Lansing shortly after their wedding.

A memorial service to celebrate Jacoba’s life will be held at Lansing United Methodist Church on Saturday, June 15, 2019. Calling hours will be held from noon to 2:00 p.m. A memorial service will begin at 2:30 p.m. at the church, followed by a “Low Tea”. As Jackie would have enjoyed, guests are invited to wear hats to the Low Tea celebration.

To order memorial trees or send flowers to the family in memory of Jacoba M. Baker, please visit our flower store.