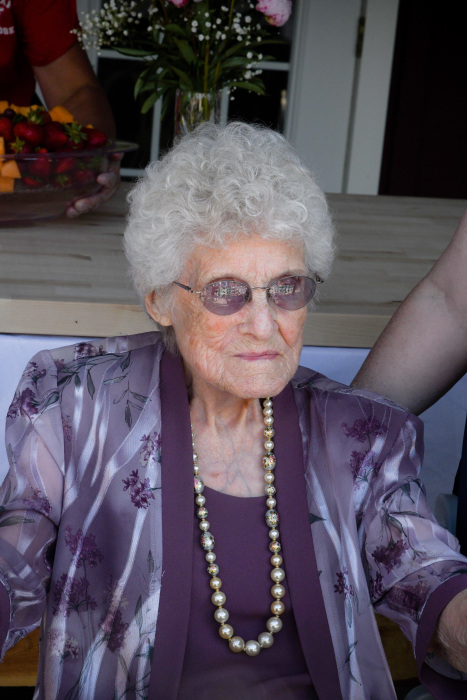 Hazel Mae Inman Sherman Hart, 99, of Lansing, passed away at her home while surrounded by her daughters on March 24, 2021.  Born in Lansing, she was the daughter of the late Walter V. and Anna May Davis Inman.

Hazel lived in various places in Tompkins County throughout her life, but Lansing was always home to her.  She attended Lansing Central School and went on to earn her GED.  For many years, Hazel worked on her first husband’s family farm on Lansingville Road—milking cows, hauling milk, plowing snow, bailing hay, and other various farm jobs.  She also worked as a Home Health Aide until age 86.  However, her most difficult and most precious job was raising her six children, whom she loved more than anything.

Hazel’s family would like to extend a special thank you to everyone at Woodsedge in Lansing for all of the love and friendship she received—you made her feel special and she loved you, and she loved living there.  Also, thank you to the Hospice nurses, Jen and Kim, and aide, Meg, for the loving care and making it possible for her to be at home; to Dr. Ristedt—she loved your personal visits and you made her feel special; and to Edna, the Hospice Chaplain for her visits.  Her daughters Pat and Connie had the opportunity to be with Hazel and care for her around the clock for the last seven months.  Her family apologizes if they forgot to mention anyone because everyone Hazel knew was important to her.

Friends and family are invited to calling hours on Saturday, April 10, 2021, from 11 a.m. to 1 p.m. at Lansing Funeral Home, 32 Auburn Road, Lansing, NY 14882.  A Celebration of Life will be announced at a later date.  Private interment will be in Lansingville Cemetery.

In lieu of flowers, please consider a contribution to your local food bank or offer your support to organ donation, a cause which was important to Hazel.

To order memorial trees or send flowers to the family in memory of Hazel Mae Sherman Hart, please visit our flower store.