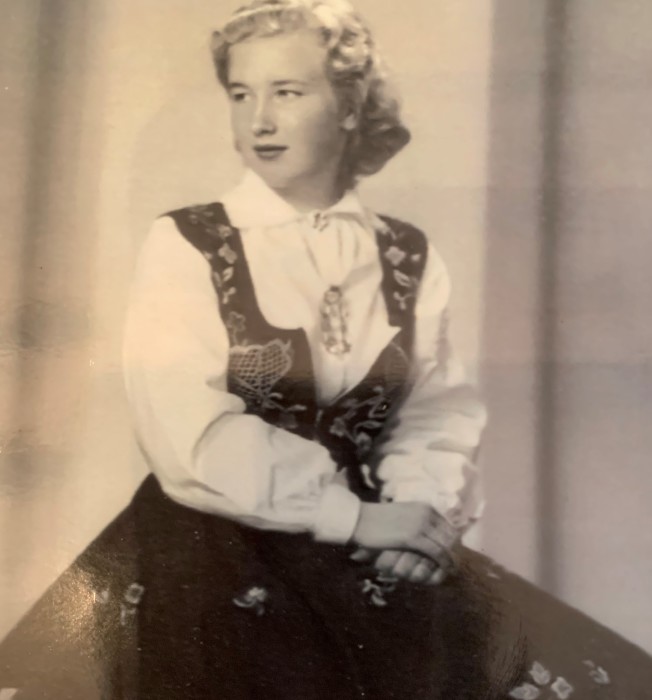 Gerd Helene (Syversen) Aasen, 85, of Lansing, passed away on March 18, 2020, while surrounded by family.  Gerd Helene was born on November 8, 1934 in Follebu, Norway, to her mother, Gunvor (Syversen) Gudbranson of Follebu and to her father, Nils Larsen of Lillehammer, Norway.  Gerd was raised primarily by her grandparents, Hans Syversen and Nilla Kampesveen Syversen of Follebu.  In 1952, she moved from Follebu to Ithaca, New York and in 1953 was married to Raymond Martin Aasen (formerly of Oslo, Norway ). After Raymond’s graduation from Cornell University in 1956, Raymond and Gerd moved to Lansing, New York where they purchased and managed a successful dairy farm and raised four children. In 1983, after the children were grown, Gerd earned a B.S. in Sociology from Wells College; thereafter working as a Social Worker at Tompkins County Mental Health until her retirement.

Gerd Helene showed incredible strength, spirit and enduring love to her family and friends throughout her life. Having emigrated to the United States from Norway when she was 19, she remained proud and reminiscent of her Norwegian heritage. Having been a child during the Nazi occupation of Norway during World War II , she relayed harrowing tales of fear and hardship to her children and grandchildren flanked by stories of courage, community spirit and love.

Gerd Helene dedicated her life to caring for others in so many ways. In addition to caring for her own children and grandchildren, she hosted countless children each summer through the Fresh Air Fund program, was a foster parent, and hosted Cornell University international students and families (Nepal, Kenya and Australia). She was active in many activities through the Lansing United Methodist Church including singing in the choir, teaching Sunday School and serving on committees. Her strong Christian faith was nurtured in Norway as a child and she continued to express that faith throughout her life. She was passionate about education and music, always emphasizing the importance of each to her children and offering support to each as they grew to become adults. She encouraged music appreciation at home by enrolling her children in music lessons and offering a huge variety of music genres.  She was passionate about gardening and spent untold hours caring for her flower gardens. In her later years, she enjoyed knitting hats and handed them out to people she met on the street or in the stores.  She inspired faith, kindness and caring to so many.

In lieu of flowers, please consider a contribution to Hospicare and Palliative Care Services, 172 East King Road, Ithaca, New York 14850, or to the Food Bank of the Southern Tier, online at www.foodbankst.org, or 388 Upper Oakwood Ave., Elmira, New York 14903.

To order memorial trees or send flowers to the family in memory of Gerd Helene Aasen, please visit our flower store.