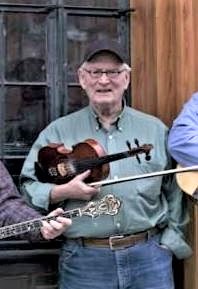 Ed McGowan, writer, Catholic peace activist, and renowned musician died peacefully at Hospicare of Ithaca on September 28, 2020. Ed’s parents, both Irish immigrants, were Felix McGowan from Kinloch, County Leitrim and Catherine Walsh of Mullagh, County Clare. Ed was born May 7th, 1935 at Knickerbocker Hospital, in NYC. Ed grew up in a tightly knit Irish neighborhood in Kingsbridge parish of St. John’s in the Bronx and went to Cardinal Hayes and Cathedral Catholic High Schools. During those years, Ed developed a fierce interest in the history of Native Americans which was the origin of Ed’s full passion for social justice.

In 1953, Ed entered seminary at St. Mary’s College in Kentucky. While there, he met and was highly influenced by Thomas Merton and his autobiography Seven Story Mountain. He was ordained in 1968 as a Jesuit priest but later left the order as his involvement in the peace movement grew. Before leaving he received his Master’s in Sociology at St. John’s University in NY. Ed briefly served in St. Brigid’s parish in the Lower East Side of Manhattan and taught at St. Thomas Aquinas College in Rockland Co., NY. During the height of the Vietnam war Ed taught at the Jesuits’ McQuaid Catholic H.S. in Rochester, influencing some of his students to become conscientious objectors.

Ed became active first in Baltimore with demonstrations against racial inequality, with Phil Berrigan, in 1967, and later got involved in anti-Vietnam war activities with the Catholic Left. In 1968, with fellow Catholic peace activist, John Peter Grady, Ed participated in numerous underground draft board raids, tearing up paper draft files, saving young men’s lives that would have been sent to war. He organized actions on the East Coast, including two called the NY Eight, the Flower City Conspiracy, in Rochester, NY, 1970, culminating on August 22, 1971, with his arrest with 27 others in Camden, NJ. The historic Camden 28 five-month trial ended in acquittal, in May 1973. it was a tremendous victory for the entire anti-war community.  In 2002, with the support of Teresa Grady, he published "Peace Warriors", the definitive account of the action and the trial. The Camden 28 was described by the late Supreme Court Justice, William Brennan, as "One of the greatest trials of the 20th century."

When he was about 10 years old, Ed’s prescient, accordion-playing father had brought him to study fiddle with the great “Sligo Master” James Morrison, in Manhattan. It was here he got a solid grounding in the instrument that he would play so beautifully until just a few short weeks ago. After Morrison’s death Ed went on to study under two other great fiddle masters of the time, Paddy Killoran and John McGrath. From Morrison, he once said, he got technique and drive, from Killoran feeling, and from McGrath, so many wonderful tunes. He and his brother Jimmy also studied dance with the renowned James McKenna, adding to Ed’s remarkable understanding of rhythm and ornament.  After his time in the seminary and his early days as a priest, Ed had put down the fiddle, not to pick it up again until years later. In the early 1980s he had the good fortune to meet Mary Coogan, Kathleen Ludlow, Steve Ross and Gerry Phelan in Nyack, New York, and the group founded the band Midnight Court, which had a good run through most of the decade.  Ed playing regularly again after this, as a member of sessions and bands wherever he lived. In the early 1990s Ed joined Marc and Kate Cushing to create the band Dal Riada, and later that decade as an anchor of the Ithaca session, become the lead fiddle player for a series of bands which eventually coalesced as his last group, Traonach. He inspired many young and old musicians to play, including some of the Grady Girls and is a well-known and highly respected musician in Ireland. Ed was predeceased by his brother Jim and nephew Eddie, and survived by his cousin Patricia McGowan of Pearl River, NY, his childhood friend, Fr. Hugh McManus of St. John’s parish, Bronx, NY and by countless friends.

A Mass of Christian Burial will be celebrated by Fr. Augustine Chumo at 11:00 a.m. on Friday, October 2, 2020, at Immaculate Conception Church in Ithaca. Mass will be Live Streamed on the Facebook pg. of Mary Anne Grady Flores.

We’ll gather at 4-6 pm for an Irish Trad musical party, Ed’s last wish, called a “Hooley” at Hospicare’s back lawn under the Balcony where we held 3 Hooleys for Ed the week before his passing. 172 King Rd., Ithaca. Take a left @ first light past Ithaca College and 1/3 mile on left is Hospicare.

In case of rain, please meet us for the Hooley at Cass Park’s Children’s Garden under the pavilion on the right. The pavilion is just beyond the garden’s main gate and parking lot.

To order memorial trees or send flowers to the family in memory of Edward John McGowan, please visit our flower store.