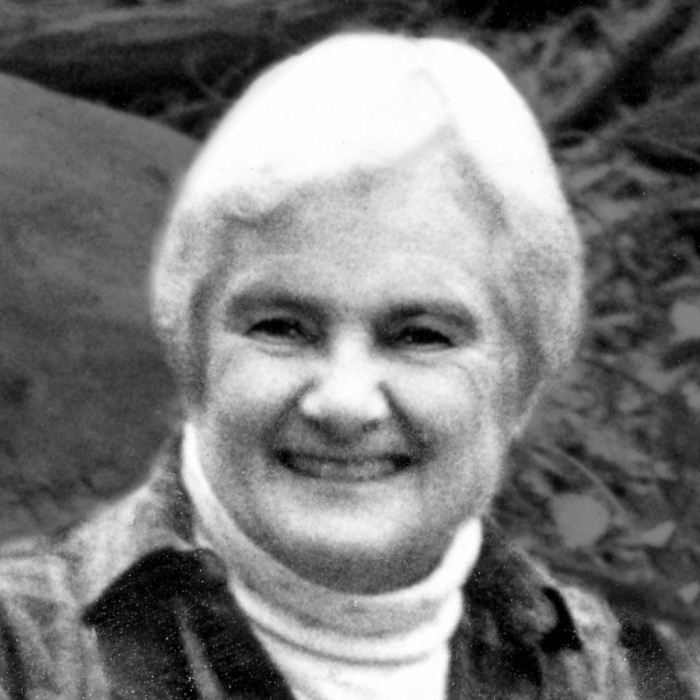 Dorothy, the oldest child of William D. and Marjory (Hastings) Warren, was born in Utica, NY, July 21, 1925. Shortly after her father received his doctorate from Cornell in 1929, the family moved to Ada, Oklahoma, where her father taught chemistry at East Central State College. When her Daddy said "Here's Oklahoma!” she was disappointed that looking out the car window she couldn't see anything different. She had memories of the pleasant smell of rain in normally dry Oklahoma, and of sand on the window sills during the time of the dust storms.

In high school, even though she was a terrible clarinet player, she played in the school band because she liked wearing the uniform and getting into football games free.

In 1941, she heard that the driver's license bureau was too busy to give road tests. So she got 50¢ from her father, took and passed the written test by giving common sense answers, and received her license on her sixteenth birthday.

In 1943, she registered as a freshman at East Central State College for $13 a term. She spent the summer of 1944 in New York City with two of her aunts; she always thought her parents wanted her to get away from an unsuitable boyfriend. One of her aunt’s friends had a brother, Peter Rinaldo, who had just graduated from MIT and was being trained to be an ensign in the U.S. Navy. Aunt Connie and her friend, Harriett, arranged for him to take Dorothy to see a Broadway play. They hit it off, and went to plays, nightclubs, or concerts every weekend thereafter.

That summer her father accepted a position as head of the chemistry department at The Western College for Women in Oxford, Ohio. Dorothy went directly from New York to attend Western as a sophomore. As part of a scholarship, she worked as a waitress that year. In the drama club, she played the part of Queen Titania in Midsummer Night's Dream. She majored in sociology and graduated a year early.

Dorothy and Peter wrote frequently while he served on the U.S.S. Macon. After his discharge in 1946, they were married in the Western College chapel on July 20, 1946. They had a six-week honeymoon in Mexico, driving Peter's sister-in-law’s Ford convertible.

After their honeymoon, Peter returned to MIT. In 1947, Peter received his Master’s degree, they bought a house in Lexington, MA, and their first child, David, was born. Marjory was born in 1950 and John in 1952. Dorothy said, "Those early years with the children were the happiest of my life."

In 1956, the family took an eighteen hour flight (with stops in Newfoundland and Scotland) from New York to Hamburg, Germany, where Peter spent a year supervising the construction of a new factory. The apartment kitchen was on the back porch with a small refrigerator and a two-burner stove. It was cold, and Dorothy burned several skirts while huddling too close to the coal stove.

During the next years, Dorothy took on most of the responsibilities for taking care of the home and children while Peter frequently traveled overseas for work. She had a remarkable ability to take care of household crises in the post war period.

When John, the youngest, was eight years old, Dorothy went to Brandeis University and received her M.S. degree in anthropology in 1965, the same year that David graduated from high school.

The family moved to Tarrytown, NY, in 1965. She established new friends and went to work for the Westchester, NY, Department of Social Services.

In 1968, Dorothy and Peter decided to build their own home in Briarcliff Manor, NY. Dorothy left her job and spent the next 18 months acting as the general contractor. She purchased materials ranging from lumber to manhole covers and supervised the sub-contractors. The house was completed in time for Thanksgiving, 1969, and Dorothy returned to paid work.

She decided to change her career and received her M.S. degree in 1973 from Columbia's School of Library Science. She was Senior Reference Librarian at Sarah Lawrence College in Bronxville when she retired in 1985.

After retirement, Dorothy and Peter traveled extensively, with hiking trips throughout the world. They enjoyed taking each of their grandchildren on hiking trips to the huts in the White Mountains of New Hampshire.

In 2002, Dorothy and Peter moved to Kendal at Ithaca. Peter passed away in May 2008. In November 2020, Dorothy moved to Bridges Cornell Heights.

Throughout her life, Dorothy devoted much of her time to non profit organizations, including the League of Women Voters where she was president of the local chapter and on the boards of the county and state leagues. She was very active with the Unitarian Church in Lexington, Croton, and Ithaca. Dorothy was active in the Kendal Residents Association and she was an active supporter of several local organizations.

Dorothy is survived by her three children, David (Suzanne), Marjory (David), and John (Elaine) and five grandchildren (Rachel, Lucinda, Alexander, Julia, and Robert) and three great-grandchildren (Nate, Josephine, and Lila). She was preceded in death by her brother (Dwight).

The family extends its deepest appreciation to the staff at Bridges Cornell Heights for their kindness, compassion and care during Dorothy’s last months.

In lieu of flowers, contributions in Dorothy’s memory may be made to the Finger Lakes Land Trust, 202 East Court St, Ithaca, NY 14850.  https://www.fllt.org/donate/

To order memorial trees or send flowers to the family in memory of Dorothy Warren Rinaldo, please visit our flower store.