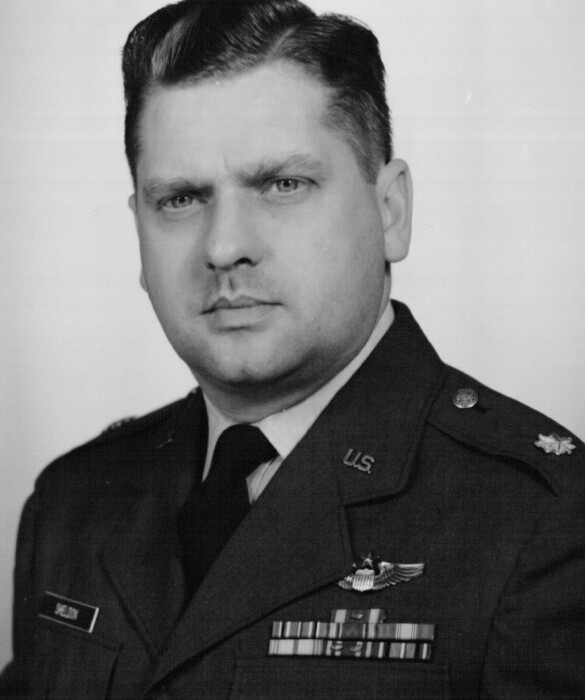 Donald James Sheldon, Lt. Col, US Air Force Ret., passed away on June 11, 2020, after singing songs and reciting military hymns with staff at the NY State Veterans Home at Oxford. He went to join his soulmate of 62 years, Jane Phoenix Sheldon (died 6/27/2014). Don was a family man who will be missed by his 5 surviving children: Diane Sheldon Wilson, OK City, OK, Donald Sheldon Jr. (Kathleen), Arlington, TX, Linda Sheldon Petak, Lansing, NY, Mary Sheldon (Mark Randall), Lansing, and Peter Sheldon, Honolulu, HI. He adored his 4 grandsons, Brian (Annette) Petak, Lansing, Jeremy Petak, Chandler, AZ, Zachary Sheldon, Gunnison, CO and Alec Sheldon (Maddie), Omaha, NE, and being “Pop-Pop” to his 2 great-grandchildren, Mikaela (“Mickie”) and Bryson Petak and his grand-boxer, Blanca. In addition, he is survived by his sister, Patricia McIntyre, Middleton, PA, and a multitude of nieces and nephews all over the USA.  Don will also be missed by his long-term caregiver, Leanne Swan and the staff in Pine Neighborhood, NYSVH, who he called “his girls.”  He is preceded in death by his daughter, Kathleen, his parents, William D. and Mary, and siblings, William, Margaret, and Michael.

Donald was born on October 6, 1927 in Buffalo, NY to British immigrants. He decided on a career in the military after his father was killed in Bari, Italy, during WWII. He enlisted in the Marines, but the war ended before he finished boot camp. Don attended Syracuse University on an Air Force ROTC scholarship, became an intelligence officer in D.C., met and fell in love with Jane on a blind date, got married and then went on to flight school to become an Air Force pilot. Family and flying were his life. Donald spent a total of 23 years in the military, flew all  types of planes from fighter to cargo, did 3 tours in Vietnam, flew around the world on missions, and lived with his wife and family on bases and places around the US, England and Germany. After retiring, the Sheldon family settled in Lansing, and Don became a RE Broker, was a Lansing Troop 48 Boy Scout leader for many years, and a Lansing Rotarian. He had a wicked sense of humor and a giggle that would make others laugh until they cried. But most of all, Don and Jane loved each other and their family, traveled anywhere and everywhere they could and enjoyed the house they built with the view of Cayuga Lake.

There will be no funeral services. A family memorial/burial will be scheduled for Donald and Jane Sheldon as soon as circumstances allow. Family requests no flowers be sent, but if you would like to contribute to a charity for any Veterans Fund/Care or for Alzheimer’s Research, it would be greatly appreciated.

To order memorial trees or send flowers to the family in memory of Donald James Sheldon, please visit our flower store.