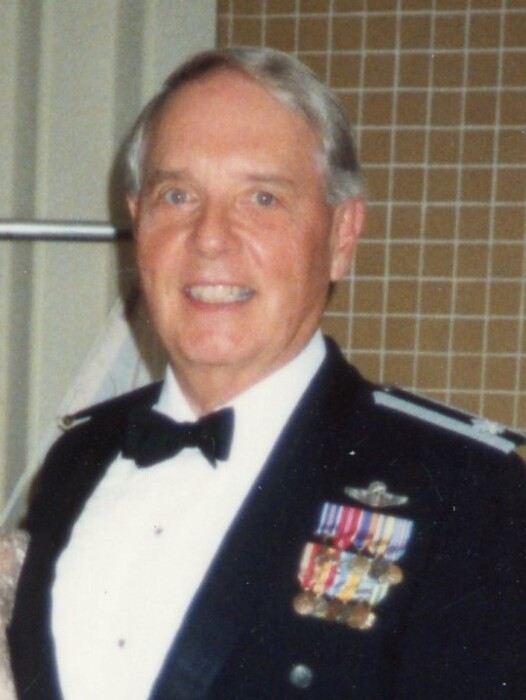 Donald William Mansfield (Lt. Col. USAF-Ret.), 93, died peacefully June 4, 2021, at the home of his daughter and son-in-law in Ithaca, New York, where he had lived for over six years. The cause of death was Alzheimer’s disease. He is mentioned in several history books, magazines, and newspapers as the pilot who dropped the last bomb in the Korean War on July 27, 1953. His flight memorabilia from Korea are housed at the Smithsonian National Air and Space Museum.

After being assigned as a B-26 pilot to the 8th Bomb Squadron of the 3rd Bombardment Wing, he was selected to drop the last bomb (22 minutes before the cease-fire ending the Korean War) by Gen. Eugene (Ben) LeBailly, who, according to an article in Air Force Magazine, had been asked by President Truman to handpick a pilot for this mission. He flew more than 30 night missions in Korea, beginning with his first combat mission, ironically, on June 4, 1953.

He joined the Air Force in 1950 (receiving his pilot’s wings in 1951) and retired in 1970 as a command pilot having flown over 5,000 hours. He was also honorably discharged in 1947 from the U.S. Army after one year of service. His decorations include the Distinguished Flying Cross, the Bronze Star, the Air Medal (one oak leaf cluster), the Air Force Commendation Medal, and the Distinguished Service Cross (awarded by the Republic of China). He was a member of the Order of Daedalians for 50 years.

He flew B-47s (and in his words, "instructed future instructors how to instruct") in the Strategic Air Command at McConnell Air Force Base (AFB) in Wichita, Kansas, from 1957 to 1963. He then studied for one year at the Air Command and Staff College at Maxwell AFB in Montgomery, Alabama, graduating in 1964.  From 1964 to 1966, he received training with the Defense Intelligence Agency and studied Mandarin Chinese in Washington, D.C., before becoming the Assistant Air Force Attaché in the Republic of China (Taiwan) from 1966 to 1969. His Air Force career culminated with one year of service in Vietnam (1969-1970).

Upon his retirement, he had a full second career as Administrative Assistant (now often referred to as Chief of Staff) for U.S. Representative John Seiberling (D-14-Ohio) from 1971 until the congressman’s retirement in 1987. During Don’s time on Capitol Hill, he was honored to provide assistance to Seiberling’s achievement of doubling the size of the United States National Park System, including the establishment of Cuyahoga Valley National Park.

He was born November 22, 1927, in Akron, Ohio, 11 months after the death of his brother, Donald Allen Mansfield, age 3.  His life began by bringing great joy to his grieving parents and older sister, then drew to a close by bringing immense joy and laughter to the four grandchildren he lived with for the past six years, as well as to his adult children and their families. He graduated from Akron’s East High School in 1945, earned a BA from the University of Akron in 1950, and received an MA from Ohio University in 1957, where he also taught Air Force ROTC. He was a proud Eagle Scout, and a member of Phi Delta Theta fraternity, and of three honoraries: Pi Kappa Delta (forensic), Pi Sigma Alpha (political science), and Scabbard and Blade (military). The mayor of Akron declared “Donald W. Mansfield Day” on January 2, 1987, to honor his 36 years of service to our country.

After retiring, he devoted many hours volunteering at George Washington’s Estate at Mount Vernon and Inova Mount Vernon Hospital, as well as serving on the vestry and committees of St. James Episcopal Church in Alexandria, Virginia. His most cherished role was that of husband, father, and grandfather; he is sorely missed. He was very witty, a talented cornet and mandolin player, loved to play handball and water-ski, always kept a beautiful yard, and loved animals, especially the family dogs who were often seen resting by his feet waiting for his gentle pat to their heads.

His family deeply thanks his devoted caretaker and good friend Robin Richards. We also thank the many kind Tompkins County deputy sheriffs who routinely came to check on Don as part of the Project Lifesaver program, and who always took time to ask him about his flying days. Finally, thanks goes to the East Hill Flying Club for the many hours Don enjoyed sitting on the deck overlooking Cayuga Lake and watching airplanes fly over our house, naming each one by make and engine, as they took off and landed from nearby Ithaca Tompkins Regional Airport.

He often commented that “the winds aloft are very good today.” So, we remember him with these lines from the poem High Flight by John Gillespie Magee, Jr.:

Oh! I have slipped the surly bonds of Earth

And danced the skies on laughter-silvered wings;

He will be inurned with his wife at Arlington National Cemetery at a later date. In lieu of flowers, a memorial contribution may be made in his name to the Wounded Warrior Project, Tompkins County SPCA, or the Alzheimer’s Association.  For additional information contact Lansing Funeral Home at (607) 533-8600, lansingfuneralhome.com.

To order memorial trees or send flowers to the family in memory of Donald William Mansfield, please visit our flower store.