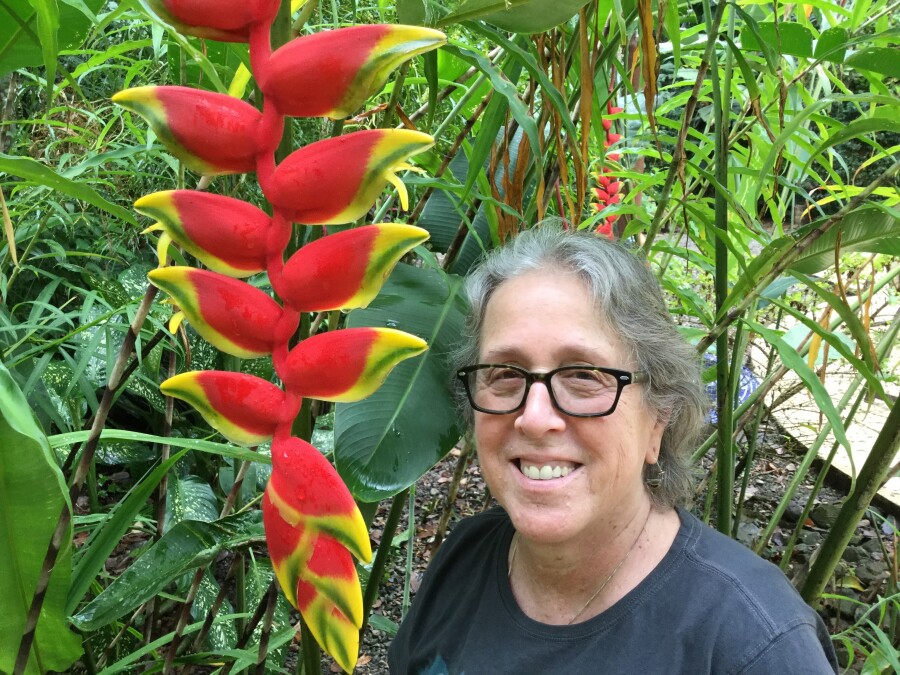 Chaya was born on August 16, 1950 in Bronx, NY. She was the daughter of Harold (Pee Wee) and Harriet Spector and the sister of Arlene. She grew up in Astoria, Queens in a cooperative housing community where she developed lasting friendships.

She attended Queens College and the College of Staten Island in New York City where she received an undergraduate degree in Cultural Anthropology. After college she briefly relocated to Santa Fe, New Mexico which she loved.

She moved to Ithaca, NY in the early 1970’s and lived in the Lavender Hill commune in West Danby where she built her own cabin. Lavender Hill became a family of friends that has lasted forever and was so important to her. She worked in the cooperatively owned Samadhara Bakery in the Dewitt Mall in Ithaca. She developed a love of cooking and baking.

She moved to California in 1980 and lived in the Bay Area. There she met b.g. (Barbara Nabors-Glass) and became a member of her extended family. Together, they raised Nikol, their beloved daughter.

After working in management for several years, Chaya started her own business as a bookkeeper.  For over 30 years, she worked with many small companies, non profits and startup businesses. She loved her clients and they loved her.

Chaya served as a board member and was very active in the Women’s Cancer Resource Center in Berkeley, CA.   While volunteering Chaya met Bridgett Perry who became her wife and partner for 24 years. Together they constantly nurtured the children in their extended family which included Joel, Nina and Skylar.

Chaya and Bridgett traveled often and extensively. They spent a lot of time in Ecuador where Bridgett founded the CITTI Project to help people with disabilities find and develop resources. During those trips they developed lifelong friendships with several of the volunteers.  Chaya also became the in-house photographer.

Chaya continued to develop her skills as a photographer and evolved into an artist of mixed media influenced greatly by indigenous cultures. Chaya was a member of an art group that met frequently, and she loved felting and making women.  She also became an avid birder, traveling to various places to see and to photograph birds.

Chaya and Bridgett moved to Ithaca in 2010. Together, they created a beautiful home and garden filled with light, art and flowers, a dog and cats. Birds flocked to their feeders. They were so happy and often traveled to their favorite destination – Costa Rica.

Throughout Chaya’s life she was a champion for social justice fighting against war, racism, homophobia and inequity. Most recently, she consistently filled the Tompkins County Mutual Aid Blue Boxes with food for people in need.

Chaya and Bridgett enjoyed time with their many friends locally, across the country and globe. They deeply cherished their loved ones and especially Mercer, their grandchild.

Bridgett was diagnosed with ovarian cancer and Chaya took care of her for six and a half years till she died in 2019. In April, Chaya was diagnosed with stage four pancreatic cancer. Her family, friends and members of the community quickly mobilized to care for her. Professional caregivers and Hospicare also provided much needed support.

She leaves to cherish her memory – mother-in-law, Rosetta, daughter, Nikol, son-in-law, John, grandson Mercer, nieces, Erica, Tania, Dara and grandniece, Nia, her beloved dog, Choclo, and cats Hudson and Chandler and a host of loved ones.       She is flying free.

In lieu of flowers, please consider a contribution to the Cancer Resource Center of the Finger Lakes.

To order memorial trees or send flowers to the family in memory of Caryn "Chaya" Elaine Spector, please visit our flower store.