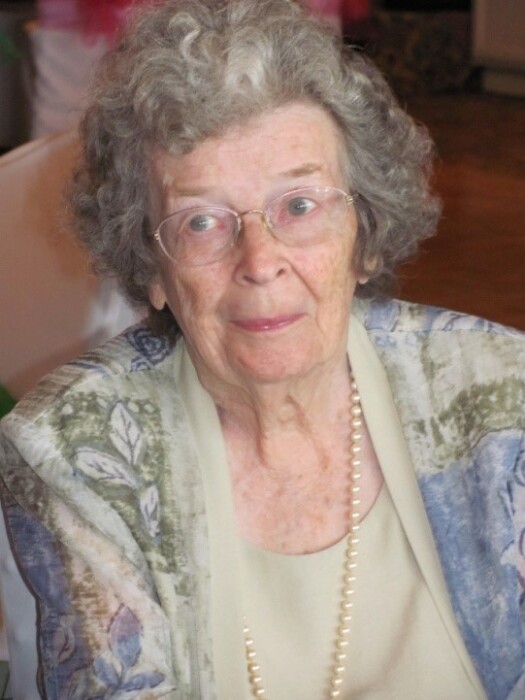 Longtime Ithaca resident and former librarian Anne “Nancy” Moore died Nov. 1, 2020. She was 97. Nancy resided at Kendal at Ithaca, where she and her husband, Franklin, moved in 2011. Nancy and Frank were high school sweethearts and celebrated their 70th anniversary two months before his death in 2016.

Nancy was a mother of six who had a warm smile, friendly manner, and strong personality. A baseball fan, she rooted for both the Yankees and the Mets. She learned to drive at age 30 by using a stick shift and refused to drive an automatic into her 80s. She was an avid reader and brought home armloads of novels from the library. She subscribed to the New York Times and Ithaca Journal until the very end.

Anne Kirk “Nancy” Smyth was born on May 17, 1923, to John Douglas “Jack” Smyth, an insurance clerk, and Margaret MacDonald (Gordon) Smyth, a former teacher, in Jersey City, N.J.  An only child, Nancy grew up in Ridgewood, N.J. At Ridgewood High, Nancy played basketball, softball, volleyball, and other sports. She wrote for High Times, the school paper, and received a journalism award. She met classmate and husband-to-be Frank Moore at an Elks Club dance in ninth grade.

After graduation in 1940, Nancy attended New Jersey State Teachers College at Montclair, now Montclair State University, commuting from home. At Montclair, Nancy continued her involvement in sports and wrote for the college newspaper and yearbook. Her senior yearbook described her as a “combination of blonde femininity and a tough basketball guard.” She often visited Frank at Cornell, where he was studying mechanical engineering.

Nancy received her B.A. from Montclair with a major in social studies and a minor in English in 1944. She enlisted in the WAVES, or Women Accepted for Volunteer Emergency Services, the women’s branch of the U.S. Naval Reserve. After training in the Bronx, she reported to the Navy Pier in Chicago, where she joined a WAVES detail working on war bond drives in Chicago and other cities. That summer she met Frank at the train station as he passed through Chicago on his way to an Army base on Adak in the Aleutian Islands. Before her discharge in 1946, Nancy worked as a clerk at the U.S. Naval Powder Factory in Indianhead, Md., and the naval barracks in Washington, D.C. She was proud to be a World War II veteran.

Nancy married Frank in 1946 at the home of her aunt and uncle, Nancy and George Nodyne, in Ridgewood. Attending were the bride’s cousin Sandie and the groom’s brother Stanley. After a honeymoon in the Poconos, the couple made their home in Ithaca, where Frank attended graduate school at Cornell. Nancy started graduate work as a special student at Cornell. She took a government class taught by historian Clinton Rossiter and heard Eleanor Roosevelt give a speech on campus. As veterans, the young couple pooled their GI Bill benefits to cover costs, until Nancy dropped her courses before giving birth to their first child, David, in 1948.

In 1949, Frank earned his PhD from Cornell and took a job with the National Advisory Committee for Aeronautics (NACA), precursor to NASA, at the Lewis Flight Propulsion Laboratory in Cleveland. They lived in nearby Lakewood before buying a house in Bay Village in 1953. Their family grew as daughters Cathy, Leslie, and Susan were born in Cleveland. In 1955, they moved to East Aurora, N.Y., when Frank took a job at Cornell Aeronautical Laboratory. Children Jeffrey and Jennifer were born in Buffalo. Once asked why she had so many kids, Nancy recalled that as an only child she envied friends who had brothers and sisters. “So we had six,” she said.

In 1965, Nancy and Frank returned to Ithaca when he accepted a professorship at Cornell’s mechanical engineering school. They made their home on Dearborn Place, near campus, which allowed Frank to walk to his office. When all her kids were in school, Nancy began working part-time at the Tompkins County Library. It was a natural fit. Nancy had been an avid reader since childhood and enjoyed helping the library’s patrons. After retirement she volunteered at the Friends of the Library Book Sale.

Nancy and Frank enjoyed going on sabbaticals. At NASA’s Lewis lab in Cleveland they saw old friends from their previous posting there. In Washington, D.C., Frank worked at NASA headquarters, and they spent a year exploring the nation’s capital from their rented apartment on Dupont Circle.

After both retired, they moved to an apartment above the Moosewood restaurant in the Dewitt Building in downtown Ithaca. Later they bought a house in Lansing, where the raised deck offered a wide view of Cayuga’s east shore and a sliver of the lake. They joined friends at Big Red football games and Hangar Theatre productions. They spent years attending Dixieland jazz festivals, bird watching, and refining their country dance skills. They traveled to Western Europe and the Caribbean. They took a two week tour of Ireland. They loved the small-ship cruises they took to Alaska, on the Mississippi River and the St. Lawrence, and to Costa Rica and the Panama Canal. They attended St. John’s Episcopal Church in Ithaca and later the Church of the Epiphany in Trumansburg. They were active Democrats. In 2003, they joined the big march against the Iraq War in Washington, D.C., and later shared photos of other protestors and their signs.

In 2011, Nancy and Frank moved to Kendal at Ithaca. There they took part in activities, attended movies and holiday dances, and frequently treated their children and grandchildren to meals in Kendal’s dining rooms.

Nancy’s family offers heartfelt thanks to the Kendal community and staff for their care and attention to the last years of her life, including the activities staff who facilitated our contact during COVID.

A private burial will take place at Greensprings Natural Cemetery Preserve in Newfield. Lansing Funeral Home is in charge of arrangements.

To order memorial trees or send flowers to the family in memory of Anne "Nancy" Moore, please visit our flower store.