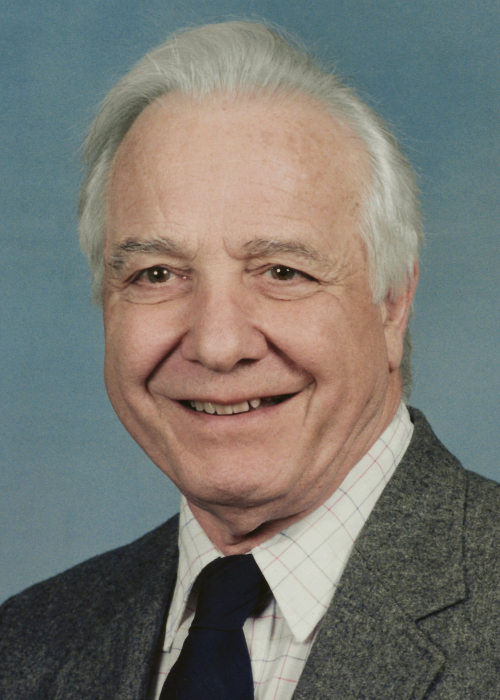 Alfred (Alfonso) DiGiacomo, 98, passed away on June 27, 2021. He was born and raised in Huntington Station, New York. As the oldest of five, he served as the translator between his immigrant parents and the Huntington School District. He graduated from Huntington High School in 1941. Al worked at Sarrow’s Grocery Store until he enlisted in the U.S. Army in November 1942. He was assigned to overseas duty in October 1943. Sergeant DiGiacomo joined the 926 Signal Battalion as a switchboard operator providing air support for ground services to the 9th Tactical Air Command. He received a medal for his service in the European African and Middle East Theater with five battle stars for his participation in the Battle of Normandy and the Battle of the Bulge.

Al was honorably discharged in November 1945 and returned to Huntington Station.  His sister Carmella “Millie” introduced him to her coworker and friend, Mary O’Brien. After a year-long courtship they married. Al was active as a leader in the Cub Scouts for eight years and the Boy Scouts for two years. He was a member of the Knights of Columbus in Huntington and Ithaca.

A self-educated architect, Al studied drafting under the G.I. Bill and, after a 12-year apprenticeship, received his architectural license. Later in life, he continued his studies and received a Bachelor of Professional Studies degree from Empire State College. He designed many buildings on Long Island, including Islip High School, South Oaks Hospital, Huntington Elementary School, Suffolk County Police Precincts, and the Long Island Arena. The design for Islip High School was selected for exhibit at the National School Boards Convention.

As County Architect for Suffolk County, he was responsible for the design and construction of many buildings including two community college campuses and the master planning for the County Center in Yaphank which Newsday described as planning at its best. Al served on the board for The Long Island Chapter of the American Institute of Architects and was a founding member of the Long Island chapter of the Construction Specifications Institute.

Al and Mary moved to Ithaca in 1980 when he accepted the position of Senior Architect with Cornell University. There, he played a key role in campus building expansion. He was directly involved in the design of Snee Hall, Uris Hall reading room, Biotechnology Building, Townhouses, Akwe:kon House, many renovation projects including Willard Straight Hall terrace and dining hall and the addition of a third floor to Hasbrouck Apartments.

Upon retirement in 1993, he enjoyed traveling and spending time with his family and grandchildren. He wrote five books including “A Soldier’s Diary” and “American Bread”, highlighting his memories and aspects of his life. He took courses in computer use and painting. Every year Al presented his personal WWII experiences to Ithaca High School students during “A Soldier’s Story Day”. He also met with Ithaca College and Cornell students as part of a volunteer program called Project Care which promotes dialogue and understanding between generations. Al loved the annual intergenerational Harvest Moon Dance. He enjoyed attending events and trips organized by the Greater Ithaca Activities Center Senior Program.

Al will be remembered for his fierce independence and love of music, photography, gadgets, books and storytelling.

Relatives and friends are welcome at Lansing Funeral Home in Lansing, NY on Tuesday, July 6, from 4:00 to 7:00 PM. A Funeral Mass will be celebrated by Fr. Joseph Marcoux on Wednesday, July 7, at 10:00 AM at St. Catherine of Siena Church, Ithaca. Visitation will be held at M.A. Connell Funeral Home in Huntington, NY on Thursday, July 8, from 2:00 to 4:00 PM and 7:00 to 9:00 PM. Burial with Military Honors in St. Patrick's Cemetery in Huntington, NY on Friday, July 9.

In lieu of flowers, the family suggests contributions to the Greater Ithaca Activities Center (GIAC), Senior Program, Attention: Zack Nelson, 301 W. Court St., Ithaca, NY 14850, checks can be made out to GIAC and mention "Senior Program" or Al's name on the memo line or The National Museum of the United States Army, 1775 Liberty Dr., Fort Belvoir, VA 22060, https://armyhistory.org.

To order memorial trees or send flowers to the family in memory of Alfred DiGiacomo, please visit our flower store.